Skip to content
Shruti DugarSeptember 8, 2015- Storyteller's storiesLeave a Comment on Sense of solace
It is true that we should and must rejoice at other’s endeavour and likewise console them in tough times, but quite astonishingly, what I encountered about human behaviour is that there is an acute sense of relief, rather a soothing effect when we get to know about other’s struggles.

This shouldn’t be treated as masochism, but its quite contrary to it.
You see, just like we evoke to be genuinely rewarding after hearing the goods about/of others, we somewhere or the other do portray ourselves to be at that place/position. Maybe it is a passing thought, but it is prevalent.

Hence likely after encountering the ills of their lives, we somewhere try to soothe and complement their hardships with ours. Neither does their struggles make our struggle easier nor do one can derive pleasure from it. It is just, a human bond sort of thing which makes us alive and connectible, Of course, this whole interconnecting dots in world would have been a happier place had our lives really reflected the way it seems on social media, but it is not.

That smiling happy faces?! that is a 5 second’s work of camera.

This world is full of human suffering, whether we want to accept it or not. Whether we shove it off as depressing or not, 60% of us are unhappy or plastic happy. Cause of our unhappiness is very subjective. If  downfall of a relationship is a reason, the other is unhappy because of peer pressure, or studies or workload and the list goes on!

We can avoid this but we can never ignore.
The reason many may not feel likewise is because they indulge them into other task, and sometimes quite unknowingly they are trapped into their web of hidden emotions.

I never liked reading newspaper till a year ago but I have a friend who loves to read newspaper. I asked her one day what makes you “love” it? There is nothing lovable about the headlines, the human sufferings are omnipresent everywhere. The bomb blast, the crimes, downfall, deaths. It is good to be updated about the events taking place in our vicinity and sure, there are good and proud-worthy news to supplement it, but majority is dominated by the former. Reading newspaper first thing in the morning makes you more grumpy, so why do you indulge in it so much?

And she startled me with an answer that amazed me.

“True, the news make me grumpy and reading about them makes me worried and sceptical of everything but I do it still because it provides me with an escape through my suffering. Getting to know that I’m not the only one who is dealing with situations and that somewhere or the other everyone has their sort of problem fills me with a sense of relief. No matter whether the news is a big news or small, it eludes me with a sense of solace. But at the end, we can neither ignore or can we avoid it. Human sufferings are omnipresent and omnipotent aspect of life. Which ever field we do choose, at the end we do depend and deal with and on mass/public relations.”


Because, you see, NO one wants to show others their burdens or negativities and hence we often dilute them. But more often than not this leads to anxiety disorder and depressions.
It impossible to always ignore a certain event, and HERE comes the role of someone whom you can trust blindfoldedly. That someone can range from your pet to your sister, to that attitude but advisable wala friend or even to your self!

If you’re reading this and find this relating, I hope you have found something that you could use in exercise. If you’re someone whose been trusted on with massive news, I hope you prove to be a helping hand.

More often, people don’t want sympathy or pity. They need reassurance. Give that. 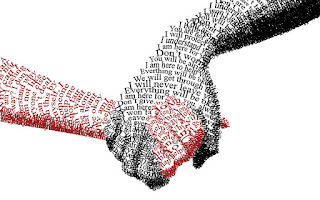 A great someone once pronounced:
“Don’t mock a pain you have never endured, because this is a small round world and Karma.”